"Breath" Saskia Edens proposes just that, a mixture of breaths, in pairs- the breathing makes small holes in a sheet of ice which she carries around from person to person. The slowly melting ice generates the potential of physical contact between the artist and the visitors. Flora's mouth exhales flowers, Fafner's jaws breaths fire, and water springs up from Boboli's gargoyles. This is a breath of life, but also a journey across worlds - the eras of ice, fire and metal. Edens is one of those rare beings capable of combining grace and energy, violence and poetry. Her performances are statements of the transformation of both matter and the body, and in a sense they parallel the world of scientific experiments where the final result is never conclusively established. We discover the magic of metamorphosis. At the start of "A contre courant", 2007-2010, Edens enters calm and composed, dressed in white and wearing earrings and necklaces. Twenty minutes later, she looks more like Mary Wigman (1886-1973) in her famous witch's dance, except that she is no

longer wearing any jewellery (it has all melted), and her clothing is stained with a wash of red and blue ink. During this time she has been running backwards on a treadmill, a dangerous exercise requiring stamina and endurance but also bringing joy. The same applies to the credible piece, Make-up, 2008, in which, before embarking on a dance macabre, Edens literally paints her body in intaglio, leaving the skin to be viewed as the skeleton.

The energy deployed in each of her performances is perceptible in the series of objects begun in 2011 with Contact Imprint works - changing states between hot and cold, passing from liquid to solid and vice versa. The gesture is immediate, the explosion is total, the violence immense: armed with a saucepan, a gas burner and a compressed air gun, Edens propels molten tin onto various objects. This is not sculpture (modeling or carving); it is closer to photography : the reproduction of an instant. The image produced shares not just the appearance of its model but its

deep structure as well. On the front, everything is just a magma of dried lava and dust; on the back, perfection and gentleness. The effect is that of a bomb blast or volcanic eruption. For Aarau, this daughter of the wind proposes a scene with tables and chairs. The result reads like an archeological site. Life has been captured in these pictures, the artist has contrived to show the vital energy sweeping through the body and beyond with all the generosity that the (art) world needs. 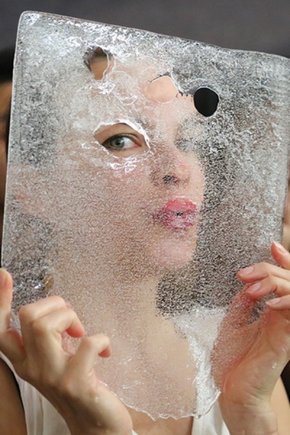