Born 1970 in Manila, the Philippines, lives and works in Copenhagen.

Lilibeth Cuenca Rasmussen graduated from The Royal Danish Academy of Fine Arts in Copenhagen in 2002. She primarily engages in video and performance art, taking her own Danish-Filipino background as a point of departure. Cuenca gathers, adapts, and universalizes her narratives in both a critical and humorous approach in regards to issues such as identity, culture, religion, gender and social relations. Cuencas productions involve scripted texts, songs; composed music as well as intricate visual elements that include set design and costumes.

In her re-enactments Cuenca explores her own art historical heritage and questions both women’s place in art history and the artist identity as such.

She took part in Live Action 9 in 2014 and was shortly thereafter presented in a retrospective at Röda Sten in Gothenburg. She participated at the 2011 Venice Biennale in the Danish pavillon with Afghan Hound: four songs on video plus a live performance. Cuenca has recieved several prizes most recently in 2012 The Carl Nielsen & Anne Marie Carl Nielsens Prize, in 2009 The Arken Prize, Travel Grant. Donated by Annie & Otto Johs. Detlefs´ Philanthropic Foundation, in 2008 Eckersberg Medal of Honor, in 2007 Aage & Yelva Nimbs Fond, Grant of Honor &  Ole Haslunds Fond, Grant of Honor, in 2006 The Danish Art Price, Aschehoug, travelgrant. In 2009 she was a resident at the ISCP, Artist in residency programme, New York City, sponsored by the Danish Arts Council, where she also in 2005 received the Three Year Work Grant. 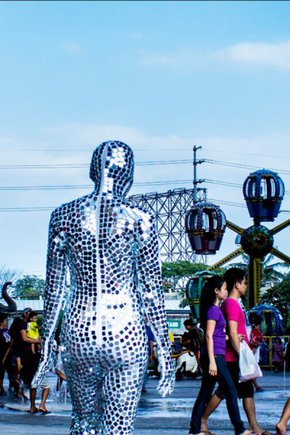