Working within a non-dualist aesthetic, where concept and beauty encounters harshness, Morgan creates a singular and often poetic expression where will power and vulnerability constitutes a common ground for a new becoming.Rong Xie appropriates contemporary of Chineseness, and tropes of Chinoiserie and femininity in order to subvert them. She has used lipstick, breast milk, clay and other materials to draw and write on her skin. She mines her own experiences of childhood, family, marriage and motherhood – and those of her female ancestors – juxtaposing English narration with Chinese traditional folk song to play with her complex hybrid identity. Her work explores the territory of translation: between two languages, between gesture and stillness, between her Chinese past and English present, between performance and image.

Rong Xie  studied at the High School of tge Sichuan Fine Arts Institute before moving to London where she gained a BA in Graphic Design at Central Saint Martins and a MA in Fine Art at the Royal College of Art. Since 2011, she has been collaborating with photographer Jamie Baker in the remediaton of her performance workA student in the Performance Pathways course at the RCA directed by Professor Nigel Rolfe, Morgan’s work were singled out by curator Jonas Stampe and included in the 9th edition of Infr’Action – Festival International d’Art Performance in 2013 and in the show DigitaLive in 2013/2014 in Canton, China. Her work has been seen in the United States, United Kingdom, France, China, Sweden, Egypt, Germany, Australia and Korea, Finland, Mexico and Iran. She won 40 under 40 perspective art award in 2017 and the China Arts Now Award 2019. 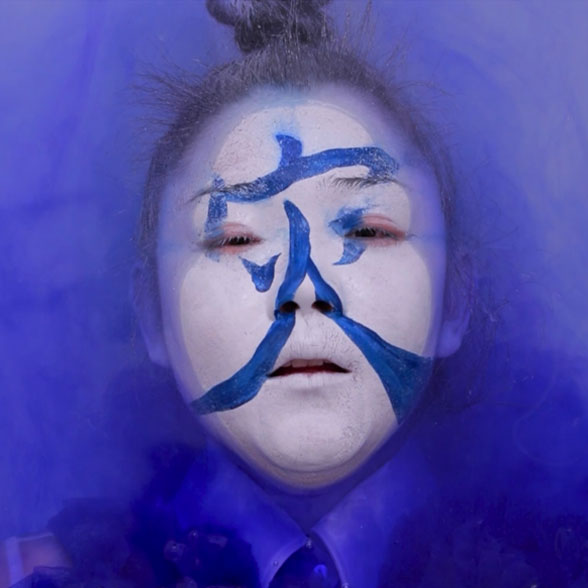 Xie Rong | Why My Sky Is Filled With Wet Tears