Lives and works in Beijing.

Ge Xiao is an artist, curator, and currently editor-in-chief of Phoenix Art, one of China’s most important art media. The daughter of two painters, Feng Xiao and Ren Song, Ge Xiao started to draw at the age of 3 and paint at the age of 14 under the guidance of her parents. She started to study painting at the auxiliary school of the China Academy of Art in Hangzhou (1986-1990), and continued to study engraving at the Central Academy of Fine Art in Beijing in 1990, graduating in 1994. In 1996 she entered as a student in visual arts l’École National Supérieur des Beaux-Arts in Paris (1996-2002), and graduated with honors for her post-graduate examination work  A Silk Worms’ Paradise (A Paradise of Games) in which she mixed installation, participation and performance art.

Having worked in different media like engraving, drawing, painting, installation and performance since her early years in Hangzhou, Ge Xiao, most recent work Inclusive (2016) was showcased outdoors in London at the Thames with the Tower Bridge as an extraordinary back drop. A work which blended ephemeral art forms like inflatable sculpture, street art and performance art, wich a conceptual focus on collaboration and participation, between artists and audiences. It was created specifically for the Closing Celebration of the China-UK Year of Cultural Exchange. The 6 meter high and 18 meter long installation had the shape of two huge inflated tea-pots connected by their spouts, with and on which a group of street and performance artists curated by Ge Xiao interacted. 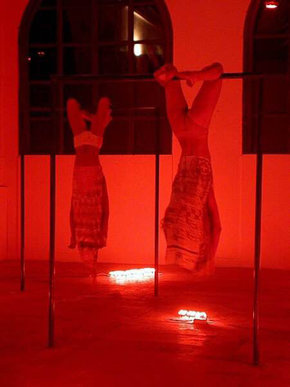