Roberto Rossini has been active as a performance artist since the mid-1970s. In the early 80s he was one of the founders of the Centro UH!, producing performances and experimental radio-drama for the national Italian broadcasting company RAI, as well as creating video works and mail art and directing the UH! magazine.

He deepened the anthropological roots of performative research exploring and visiting native cultures and have further conducted a large number of seminars on corporal research. Rossini has also realized works of video-art exploring the processes of the unconscious mind and held lectures and given workshops on the subjects of performance and multimedia communication.

He has collaborated extensively with the Museum of Contemporary Art Villa Croce in Genoa in different projects ranging from performance, exhibitions and education. He is a member of the artistic direction of Art Action, the International Performance Art Festival of Monza. Rossini is Professor of Performance Art Theory at the Traditional Arts Institut – Museum of World Cultures of Genoa, as well as of Museum and Exhibition Design at Istituto Europeo di Design in Milan.

In 2012 he published the book Performance art: myth, ritual and play, edited by Utopia production, and in 2015 co-published Italian Performance Art, ed. Sagep. 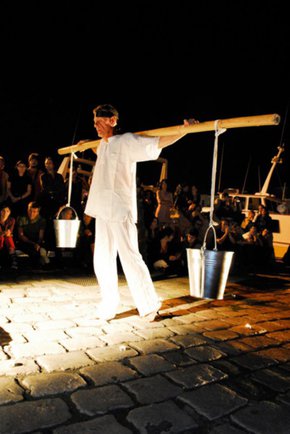