Carlos Martiel is an emergent artist but has already realized an impressive œuvre, like Asentimiento which covers this editions poster of Live Action. Socially engaged with a direct yet conceptual stance, his work is usually very simple in its appearance. Carrying with it a subject matter and an execution that fuses into pure poetry. It is difficult not to be convinced by his imagery which to a high degree is not only innovative and compelling but consistent. Martiel’s creative palette is vast, with a choice of objects and materials that is never repeated and goes beyond tradition and praxis. If we can state that his work stands out today in performance art, it is because of a fusion of a conceptually profound and aesthetic imagery, executed with an apparent simplicity. A simplicity that we know is very difficult to achieve. His compelling images never stops to astound, and we can only wait and see what he will do for Live Action. 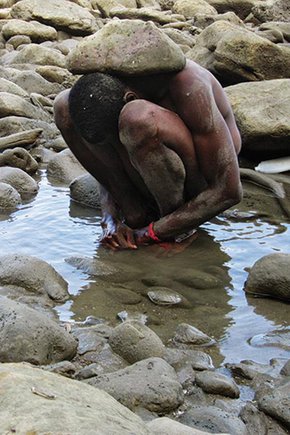