LIVE ACTION innnovates in its event design with the strand Live Time, whose key notion we formulate as extended audience time. A concept that we have developed as to simplify the audience's access and ability to assimilate, see and experience today's most cutting-edge and free art form. At the same time, it provides a possibility for us to present one the most exciting formats in performance art : durational works. We know that direct experience of artistic creation fascinate, thus we have invited an artist to create a work live outdoors for 72 hours at selected sites in Gothenburg’s urban space. Live Time presents five artists in as many weeks and starts on July 30 and finish on 30 August, with each work being realized from Thursday at 2 pm to Sunday at 2 pm.

Live Time gives the audience time and possibility to come and go – and of course to return in a showcase of some of the most prominent experimental artists in todays performance art, XIAO Lu from China, ARAHMAIANI from Indonesia, Lilibeth CUENCA RASMUSSEN from Denmark, Nigel ROLFE from Ireland and Joakim STAMPE from Gothenburg, Sweden.

The first one to start Live Time is Nigel ROLFE, professor at Royal College of Art in London, and a legendary performance artist. Rolfe has previously been presented at Live Action in 2013 and 2014 and will showcase his work ReRun at Bältesspännarparken.

The following weeks Live Time guest is Lilibeth CUENCA RASMUSSEN who participated in last years Live Action with a following retrospective show at Röda Sten. This year we have given her the commission to realize her work Human Being Human during three days at Götaplatsen.

During the city’s own culture party, Kulturkalaset, Gothenburgs own son and one of the co-founders of Live Action have the honour to present his site specific durational work Black Carboniferous Poetry at Kungsparken behind Stora Teatern.

The next week arrives the renown indonesian aritst ARAHMAIANI who arrives directly from a participative community project in Tibet which she has been developing for some years in collaboration with the local population. Her three day work Shadows of the Past will be created live in the green calm of Trädgårdsföreningen but is also mobile.

Finally, it is our honour to receive the chinese legendary artist and feminist XIAO Lu who in the Live Time strand during three days will create her site specific work Emptiness in the beautiful area of the red stone at Röda Sten. 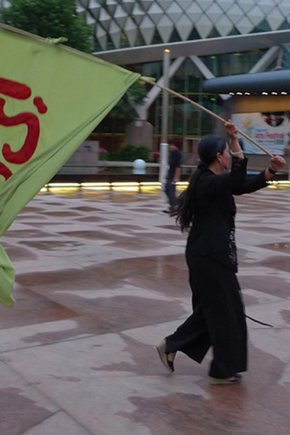