Born 1983, lives and works in Paris.
Sarah Trouche is a French visual artist. She is part of the class of 2007 of the École nationale supérieure des Beaux-Arts (Paris National School of Fine Arts), where she trained under artists such as Jean-Marc Bustamante, Jacky Chriqui and Guillaume Paris. She complemented her training under artist Mike Kelley at the Pasadena Art Center College of Design, where she graduated with a Master of Fine Arts in 2007 and at Goldsmiths, University of London, where she graduated with a Master in Performance-Making in 2008 .Trouche’s work is centered around cultural and political issues such as migration and displacement, and invites us to question the major challenges we face today.
Working across borders and cultures Sarah Trouche explores Through sculpture, dance , photography, installation, performance and video the complexities of place, identity, displacement, and ideological differences associated with migrant experiences and marginalization.
Sarah Trouche ´s practice is informed by moving between Several communities and attempts to enlighten our understanding of universal dynamic between form and politics, and between history and representation.
Trouche’ s multidisciplinary practice critiques our political, social and economic structures and articulates the experience of « otherness » In 2014 She is a recipient of the Extramural Villa Médicis grant in the living arts category and she participated in numerous collective exhibits, both in France (Fondation d’entreprise Ricard ,“Camera as release” for Paris Photo , Centre d’art le Lait, le 104, the Brownstone foundation…) and abroad (Manifesta Zurich,Rapid Pulse Chicago , Artbat fest in Kazakhstan, Marrakech Biennial 2014 in Morocco, OCAC Taipei in Taiwan, New York Armory Show in the States, Hakusen gallery in Tokyo, Japan…).
She’s also been invited to collaborate with several art schools, namely the École des Beaux-Arts de Metz and the École des Beaux-Arts d’Annecy in France and the University of North Carolina, Charlotte in the States and the National Taiwan University of Arts abroad.Her work has been acquired by JP Morgan, Sjberwin, the Benenson Collection, the Mosquera Collection and the IADA Foundation. 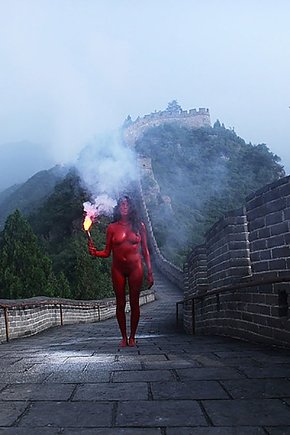